So Much It Hurts

Pia Donovan is a small town girl. Newly in the City from a tiny town in Nebraska, she is overwhelmed by the fast pace. After a long day of getting lost in the worst part of town, she arrives at her destination; an historic, grand hotel in the downtown area. Picking her way across the rutted ground in front of the building, she loses her balance, nearly falling into the arms of Flynn Chancellor. Handsome and friendly, Flynn presents a happy distraction for a girl who’s trying to recover from a broken heart. 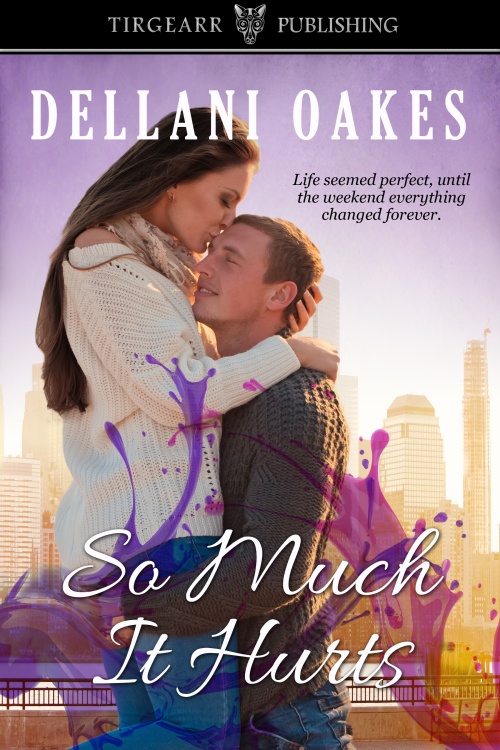 Sweet, sultry music poured from the open second-story windows as Pia walked across the pitted, uneven ground. Scattered with puddles and trash, it wasn’t a very inviting aspect. The old, grand hotel building loomed above her, intimidating in the dusky light after sunset. Sighing, she forged ahead, dragging her rolling suitcase after her. It bumped into a particularly deep hole and caught. Yanking, she lost her balance and teetered to the right.

“Watch out!” Strong hands caught her, setting her on her feet. The same hands lifted her suitcase. “You all right, little lady?”

Pia wasn’t sure she liked being called a little lady by any man, but when she turned to look at him, she decided he had the right to. He was at least six foot three, maybe taller. She, a petite five three, was indeed a little lady. He flashed a brilliant smile at her.

“You’re the newbie.” He extended his hand. “Flynn Chancellor. Welcome to the fold.”

“Pia Donovan. Thank you. How does this work, exactly?”

“Didn’t get orientation?” He tugged her suitcase, ushering Pia inside.

“Sort of? They told me to report here this afternoon, but I took the wrong bus and ended up on the way to Maryville. I got as far as Walnut Street and finally figured out I was in the wrong spot.”

“Ooh, not a place for a lady of your delicate sensibilities to be.”

“Yeah, tell me about it. The driver wouldn’t let me out on the street. He dropped me at a satellite station and told me the right bus to take back.”

“He said he has a granddaughter my age. He wouldn’t set her loose to the wolves.”

Flynn chuckled. “Apt. I grew up in that area. It ain’t pretty.” He opened the door for her, letting her walk under his arm. It was an easy fit. “Where are you from, Pia Donovan?”

“Out of state. I moved here from Nebraska. Outside Kearney.”

“No kidding? What brings you up here?”

“I got a scholarship to City University.”

He opened a set of inner doors which led into a large, open area. To the right and left there were arched doorways which had once led to reception and lobby areas. They were now full of cast-off furniture and crowds of men and women, all about her age. Every ethnic blend imaginable greeted her small-town Nebraska eyes.

“We’ve got several music majors here. I’ll show you around, if you want.”

“We talk to Amita.” He pointed to the desk area. It had formally been the receptionist’s desk — a tall, dark wooden structure that wrapped around like a bar.

“When was this place built?”

“And they’re tearing it down?”

“No. It will, eventually, be renovated.”

She nodded, looking around her at the early elegance of the place. It sported dark wood wainscoting, light walls, brass wall sconces. This was in stark contrast with the battered linoleum laid over the original hardwood floors, holes in the walls, and pieces of plywood over missing glass panes.

“You wouldn’t know to look at it, but it was a showplace in its time. Celebrities from all over the world visited. It was built by one of the founding families, so they will never tear it down.”

“It’s still got a stateliness to it, doesn’t it?”

No one was at the desk, but he leaned over and called through an open doorway. “Oi, Amita! Found our newbie!”

A tall, mocha-skinned woman with wildly curly hair came out, wiping her hands on a dish towel. “Hi! You must be Pia. I’m Amita, I’m the resident manager. We expected you ages ago.”

Flynn chuckled and leaned against the tall desk, hands in pockets. Pia had a moment to take in details she hadn’t noticed outside in the dusk. He was broad-shouldered, with dancing green eyes. His chestnut colored hair was nearly to his shoulders, thick and straight, covered by a faded black fedora. Steel gauges, about the size of a quarter, stretched each earlobe. His arms were covered by intricate tattoos, forming sleeves from wrist up. His shirtsleeves were rolled just past his elbows. Rusty black pants, which looked as if they had seen better days, dangled from colorful suspenders. His huge feet were covered in clunky, leather boots. Every piece of clothing was spattered with different colors of paint.

“You’ll be in the Ambassador Suite,” Amita said with a grin, handing over a registration card for Pia to sign.

To Buy So Much It Hurts