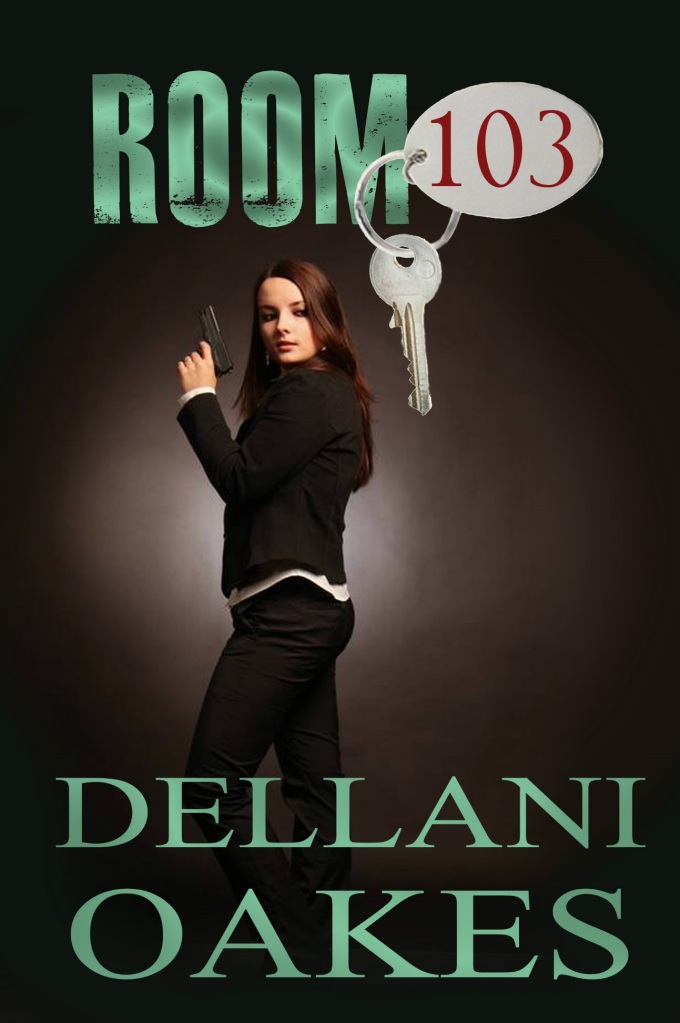 How long have you been writing?

I’ve been writing stories since I learned how to write. Before that, I made up stories and told them to my mother and anyone else who held still long enough. After my older sister started school, I started making up stories about my friend Snowy Green and our adventures at Rainbow School. I don’t remember them, but my mother does.

Which of your main characters is your favorite? Do you have more than one?

I have so many characters I love, but I have to admit that I fell in love with Kris in Room 103. He’s such a wonderful man who’s loved Marice since they were teenagers. Don’t get me wrong, Marice is kick ass and I love her, but there is something very special about Kris.

Where do you find inspiration?

I find it in the strangest places. I’ve gotten inspiration from a mud puddle before—go figure! For Room 103, it came from several places. Firstly, a conversation with a gentleman who was staying at the same motel I was. He happened to be there for his fortieth high school reunion—which gave me a backdrop (only I changed it to college). I was bored, which isn’t very hard to be in Pittsburg, Kansas, and I needed something to occupy me. And finally, I was walking from the breakfast room to my room and passed a door marked 103. I couldn’t figure out why it was there. It was obviously for the owner’s quarters. Also, I had to ask myself where rooms 101 and 102 were….

What kind of music do you listen to when you write?

It’s easier to say what I won’t listen to: Rap, Club Music and Twangy Country. I had a lot of Classic Rock, Blues, Soul and Southern Rock going when I wrote Room 103. I also like a few Indy Rock musicians, but generally just select songs and not an entire repertoire. I’m very picky about what I listen to. Sometimes, it has to set a particular mood, other times it’s simply background sound to drown out noises.

I was fortunate, when in college, to attend lectures given by several famous authors. I met and conversed with Robin Cook – Coma, Richard Brautigan – Trout Fishing in America, Edward Albee – Who’s Afraid of Virginia Wolf. I also saw Harlan Ellison speak. I didn’t get to meet him, though.

Through my radio broadcasts I’ve met so many amazing authors, I can’t even name them all. Probably one of my favorite duos to have on are Janet and Chris Morris because I have been a fan or Janet’s work since 1982. Not only that, they are just super cool.

What is the weirdest thing a character ever did in a book?

My characters have done some strange things. I think the weirdest that one of them ever did, was the villain in New at Love. She was mad at her ex-husband for dating a new woman (even though, she herself, had cheated on him) So she broke into the new girlfriend’s apartment and shaved the cat before taping him (the cat) to the hood of his car. (The cat was okay, though. Don’t worry.)

Who really wrote the book, you or your characters?

My characters always write the book. I take them to a point and then they hop on board the Crazy Train, fire up the engine and take off like a wildcat, running full throttle. I have no control and that’s the way I like it.

How many books have you started and how many have you finished?

Unfair! Why did I ask myself this question? Fortunately, I know the answer, because I recently counted them up. I’ve written a total of 137 novels or novellas. Of those, 90 are finished and 47 are still waiting for their endings. Of the finished novels, 10 of them have been published. These numbers are mind boggling enough for me.)

I set myself a goal to finish a book a month in 2016. I’ve finished off 10 so far. Three were written entirely in the month, the rest were unfinished novels that I finally wound up! I’m pretty excited about that!

What’s the hardest part with writing: the writing of the story or the editing?

For me, the writing is easy and the editing is simply tedious. I do my best to make my first draft as close to a final draft as I can. I mentally edit as I write and read through the prior writing session before beginning a new one. This not only refreshes my memory, it gives me a chance to catch errors. I have to change things as I see them, because otherwise I miss something. I can’t guarantee that I’ll spot the same mistake when I go through the next time.

If Room 103 was made into a movie, which would you choose and who would you cast?

Funny I should ask myself that question…. I like to have an actor or actress in mind for my main characters. It gives me a voice, stance, movement pattern for the character I want to portray.

If your characters had theme songs, what would they be?

For both of them Hold On by Alabama Shakes

What’s your greatest strength as a writer?

Dialogue – hands down. This is what I excel at. I’ve been told my love scenes are good and steamy too. I also think I do well at fight scenes. If all of that is entirely untrue (which I hope it’s not) One can’t fault my grammar. I won’t say it’s flawless, but it’s pretty good! I’m proud of that.

You write some steamy love scenes. Do people ever think that you’re some kind of sex fiend who’s had a really exciting life?

Fairly often. People don’t accost murder mystery authors and ask them how many people they’ve killed, but they will ask romance authors, “Have you really done that? You must have a great sex life!” It’s imagination, folks!

A lot of your characters are career or former military. Have you ever been in the service?

No, though many friends and family members have. I like the military characters because they have skills that the average person doesn’t. Characters, like Teague (The Ninja Tattoo) and Frank (Bad Fall) are self-possessed, confident, unflappable and willing to risk themselves for others. They take protecting the people they care about to another level. They are able to follow through with the promise to keep them safe.

Many of your characters come from large families. Is your family as extensive as theirs?

Not really. I am one of 14 grandchildren on one side and one of 8 on the other. My immediate family consists of me and my older sister. I like the dynamic of the big families. They hold one another dear, embrace eccentricities and don’t take themselves or anyone else too seriously. It also gives me a wealth of minor characters to draw on.

What’s your take on romance novels where the main conflict is between the main characters?

I’m so glad I asked myself this question! I hate them. A little arguing goes a long way. I like my characters to get along and enjoy one anther’s company. If they’re fighting, they aren’t falling in love and having hot love scenes! Not only that, I feel that the conflict should come from outside their relationship. They get stronger because they battled adversity together. I think it makes for a much more interesting and entertaining story dynamic.