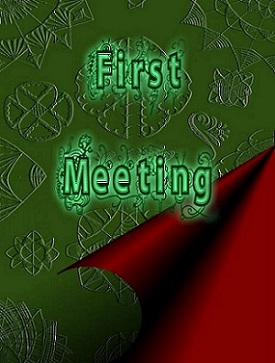 I love First Meetings. Introducing us to the main characters, they set the stage for what’s to come. Dill Hamilton has an abusive boss, RJ Caldwell. Having just gotten away from him, he’s taken a job at a local steakhouse. Unfortunately, RJ finds out and confronts him, violently. The sheriff’s department arrives, and Dill meets Deputy Haylee Cassidy.

Sirens screamed to halt outside. RJ faltered, sinking to his knees with his hands behind his head. Bark put the rifle down and they waited while Levy and Haylee raced in. Caldwell was cuffed, his rights read, in less than five minutes. While the sheriff hauled him in, Haylee sat down to take statements. She started by eliminating those who hadn’t seen anything, or at least said they hadn’t. Mostly, she concentrated on Carla, Joe, Bark and Dill. She took the others first, then sat down with Dill. The bar cleared early as the deputy talked to and released the patrons. No one felt much like drinking when a cop was there.

“Yeah. Not sure how that happened.”

“I do. Leanne, our dispatcher, told him when he called in. We asked her not to, but she’s honest to a fault, and it felt like a lie. In her defense, she thought he was genuinely worried about you. He can be damn convincing when he wants.”

“Tell me what happened.”

“I worked partly in the office, then Bark needed me on the bar. I have experience, so I agreed. Good night, no serious issues. It felt great to be back around people, you know? It’s real isolated out there with only RJ for company. Once in awhile, he’d have a visitor, but I wasn’t allowed to talk to them. I saw Carla when she came up. Sometimes, on my day off, I saw some folks.” He shrugged, shaking his head.

Dill chuckled, his gray-green eyes focusing on hers as he laid his arms on the table, hands folded. “Honestly? I have no idea. I had no other choice. Or I thought I didn’t.”

“What made you leave?”

Glancing away, Dill swallowed. He looked so young, vulnerable, Haylee wanted to hug him.

“He slapped me. All the time. What kind of a man slaps people?” His eyes darted back to hers. “And what kind of a man stands there and takes it? I stayed because I needed the money. Then it got to the point where the money wasn’t enough to make up for the humiliation. I’d rather work in a strip club with women grabbing my ass, than spend another second with that man. I was on my way back to the Purple Pony when I stopped here for dinner. Bark offered me a job, so I stayed.”

Haylee nodded, scribbling in her notebook. She couldn’t look at him. Tears welled in her eyes and she bit her lip so she wouldn’t cry. Mouth in a tight line, she swallowed and regrouped before looking up again.

While she wrote, Dill watched her. She was a pretty woman, firm jaw, high cheekbones, full lips. Her pale blonde hair was natural. Her body sported a light tan which was mostly tightly grouped freckles. She looked up at him again and he noticed that her eyes were a startling, penetrating turquoise, like a mountain lake. Swallowing quickly, he tried to pretend he hadn’t been staring.

“So, RJ found out from Leanne that you were here. Had he been drinking when he came in?”

“I’m not sure. I wasn’t that close. He was furious and started yelling about getting me back and exacting revenge. He gets very dramatic when he’s mad, starts to talk like a movie script. He made some threats and that’s when Joe ran for Bark. Bark came out with his rifle and told him to leave, but he refused. Shortly after that, you arrived.”

“Where are you staying?”

“Here. Bark’s got a couple rooms. It’s part of my wages.”

He rattled it off. “I took the battery out, though.”

“RJ. I didn’t want him to track me. He’s got a program on his computer. Guess I can put it back in. Not like he doesn’t know where I am.”

“Good point. Besides, your mom might call, or something.”

He wiggled his fingers to indicate that it wasn’t a problem. “They’ve been gone almost twenty years. I don’t remember them.”

“Do you have any pictures?”

“Used to. You lose things in foster care.”

Haylee couldn’t stop herself. She took his hand, squeezing his fingers. “I’m so sorry.”

Dill looked surprised and his gaze dropped to their clasped hands. Her hand was pale against his, but strong and her broad palms were calloused.

“People die,” he said calmly. “But thank you.” Raising her hand to his lips, he kissed it.