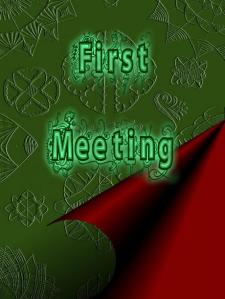 Krista Blade is home from college for the Veteran’s Day service at the church where her father is pastor. Several military people have joined them, playing musical instruments to accompany the choir. She knows two of them, but the rest she doesn’t. She makes rather an impression on Air Force Lieutenant Coulton Ferris.

Krista excused herself from the knot of sopranos and picked her way across the frosted grass. Her shoes, predictably, slipped on a slick patch. Four men in uniform rushed to her aid. The Air Force lieutenant reached her first. He steadied her, grasping her around the waist when her shoes failed her once more.

He grinned, dark blue eyes twinkling in his handsome, square jawed face. His close cropped hair was so short, it was hard to tell the color, but the shadow on his chin, that no razor could obliterate, was dark.

“Gotcha,” he said with a smirk.

Krista’s blonde hair escaped its confines. She pushed it back, smiling up at him. The men formed a line, handing her off until she stood by her father and the young woman in the Coast Guard uniform. The Air Force lieutenant followed closely, his hand at the small of her back to catch her if she fell again. The young woman standing with her father, laughed as Krista and her lifeline approached.

“Doggone, K., if you aren’t the clumsiest girl on Earth!” Her dark eyes glittered mischievously in her mocha face, her curly hair pulled back in a tight bun. “And what have you got on your feet?”

Krista put a hand on the sturdy airman’s arm and raised a foot. The Coastie whistled, making a disapproving noise at the four inch stilettos.

“Girl, you got a death wish? Don’t I always tell you to wear something you can run in?”

Krista embraced her life long friend. “Trish, you fuss so about everything, I can’t keep track.”

The young women laughed, getting louder as Krista lost her footing again.

“Before you fall, let me introduce my fellow musicians. Holding you up is First Lieutenant Coulton Ferris. Behind him, to your right, is Sergeant Benjamin Ross of the Marines. To his left is Staff Sergeant Mitch Abrams of the Army. And there, about to grab your fanny, is Ensign Torrance Beck.”

“Thanks, Trish. Him I know.” She turned to the man behind her, hugging him close.

Torrance Beck, Trish’s brother, returned her hug. Friends all their lives, they were one another’s first love. That was over now, but a lingering affection remained.

“Good to see you, Tor,” she murmured into his broad chest.

“Thanks for all the cards and boxes,” he said, easing his grip. “They got me and the guys through some tough spots. Especially loved the entertainment box.” He took her hand, explaining to the others. “K. got this huge box and put all kinda dumb stuff in it to make us laugh. Farside cartoons, CD’s with Ron White and Lewis Black, floppy bunny ears—all kinda stuff.” He thought of something in particular that caught his attention, but didn’t say in front of her dad. His expression was enough for the others to know it had been very personal. “Got us some good laughs,” he finished rather lamely.

“We ready to go to the reception?” Her father clapped his hands, rubbing them together.

Agreeing that was a good idea, they headed toward the church. Krista slipped twice before they’d gone ten feet. The third time, Ferris picked her up, carrying her in strong arms across the frozen ground. Laughter followed. Krista buried her face in his chest, giggling at herself.

“Gotta agree with Beck’s assessment of your footwear, Miss Blade. What were you thinking wearing four inch stilettos on a day like this?

“I’m short,” she replied, her answer muffled in his chest. “I wanted people to be able to see me.”

He set her down on the sidewalk, an arm still around her waist.

“Besides,” she turned her foot from side to side so he could see the bright red shoes more closely. “They’re so cute! I couldn’t resist them.”

“They’re cute, all right,” he agreed with an ill concealed sigh. “They’re hot,” he mumbled. “Lil spicy for church?” His remarkable blue eyes met her dark brown ones.

“I’m not always at church,” she answered with a toss of her blonde hair.

He chuckled. “True. Those are more for salsa dancing.” He shimmied, releasing his grip on her for a moment.

Krista lost her balance again, falling against him. He caught her and they toppled off the sidewalk onto the soft, snow covered flowerbed by the sidewalk. The others ran up. Torrance picked up Krista, setting her on her feet, both arms around her. The other men helped Ferris to his feet, pummeling him as they slapped at the snow.

“Damn, Coulton, you’re just as clumsy as she is,” Ross commented.

“My fault,” Krista replied, blushing deeply. “I think I need a shoe change.”

“Ya think? Come on, KB, I’ll see you home and you can put something sensible on your feet.” Trish took her arm, guiding her to the large house next door to the church.