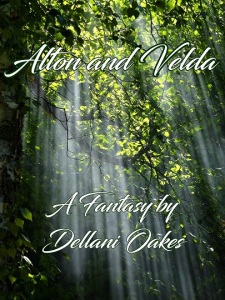 Revanth and Alton have found Eleion. Alton speaks to her, asking for aid. When she refuses, he uses a spell to raise her from the ground, cutting her connection with the swamp. While she’s incapacitated, he binds her with an oath.

He continued to bind her will and intentions, giving her the Deal Maker’s Oath. It was equally binding to both parties. If she wanted to be protected, she had to accept.

“Do I have your promise that you will not harm me if I help you?” Eleion said, somewhat subdued.

“You have my promise that I will not harm you, if you aid us as we need.”

The rest of the deal was struck. Alton, having dealt with witches a time, or two dozen, before, knew how to give her very little leeway. As protected as he could hope to be, he spit on his palm, lowering her enough to clasp her spit covered palm.

“As you wish,” Alton said, lowering her with a thump.

Eleion advanced, poking her long, sharp nailed finger into his chest. “I know you, Sprite. You and I have crossed paths before. We shall again. The next time, I won’t wait for a deal, I’ll kill you where you stand.”

“You’ll try,” Alton said with a smile. “Now, for our deal. You have agreed to change my friend back to his former self. And no tricks, or your head is mine.”

Digging her toes into the mud, Eleion spoke in a guttural language that made Alton’s skin crawl. His hair stood out, making him feel quite peculiar. It was nothing to the effect it had on Revanth. He collapsed to his knees, gulping and retching. His body shivered and shook, his bones snapping and cracking. The horse writhed on the ground, pawing the air with his hooves as he tried to breathe. With a scream that sounded as much human as horse, he lay still.

“You’ve killed him!” Alton drew his sword. “If you have lied to me, Witch!”

A moan at his feet greeted his sensitive ears. The horse body fell to black dust, coating the naked man within. Squinting against the light, Revanth rolled to his hands and knees. Rocking back on his heels, he raised his hands in front of his face, marveling at them.

“I’m myself again! I am a man! Thank you, Eleion!” He grasped her arms as if he intended to kiss her, but stopped himself. “You did this to me, you foul hag!” He took a step toward her, but stopped as his feet took root in the mud. Wild-eyed, he gazed beseechingly at his friend.

“Peace, brother. You have thanked her for your release, but take no action against her.” His dark green eyes flickered and he shook his head.

“I lost myself for a moment. Brother, do you have spare clothing? I can hardly walk around the land without my pants.”

Alton chuckled, digging in his pack. He handed Revanth his clothing. The binding on him receded, and he was able to dress.

“The other part of our deal, Witch,” Alton said. “I don’t wish to sully my blade with that swamp water you call blood.”

“You could make an effort to be more polite, Alton of Lyndon Meade,” Eleion spat. “You don’t remember, do you? Who I am? How we met?” She grasped him firmly between the legs, rubbing hungrily. “Do you remember now—lover?”

Taking a step back, he pushed at her. “I remember you did your best to suck the life from me, and leave me to die—lover. Ill met one night when I’d had more mead than sense. A less than satisfactory tumble, I must say.”

“Wait!” Revanth said, struggling with his pants. “You know her?”

“In every sense of the word,” Alton replied, his tone cold. “She lured me to her, pretending to be Velda. It was the first time I was unfaithful, shortly after we met. Then, the witch tried to kill me for her amusement. Velda banished her here, to live the best she could amongst the slime and putrid gasses. You deserved worse. Your sister was kind.”

“They are sisters?” Revanth paled. “Is that why you told us to seek her out? Why you ruined my life? Revenge, because she had the man you couldn’t have, except by trickery?”

Revanth snatched Alton’s sword from his scabbard. Swinging it in a tight arc, he severed Eleion’s head from her shoulders. The ground rumbled as her head fell. The water rose, lapping and grabbing at their feet.

“This way!” Old Jon called from a tangle of trees not far away.

“The deal,” Revanth said, halting. “I broke the deal! What will happen?”

“Run!” Alton urged. “The swamp will eat us alive, if we give it a chance.”

They followed Old Jon to his holding. The world around them shuddered and shook violently. Trees, bushes and grasses tried to trip them. Animals crossed their path, but they cast them aside. Once back at Old Jon’s land, they stopped running. Though the trees and mud writhed and reached for them, they could do no harm to the three men. Gulping air, Revanth leaned over, supporting himself with his hands on his knees.

“I broke the deal. I killed the witch! What have I done?”

“Saved us all a lot of trouble,” Old Jon said, grinning. “And you didn’t break the deal.”

“But how? We promised no harm would come to her.”

“No,” Alton said, smirking. “I promised I would do her no harm. I never said you wouldn’t. When she said you will not harm me, she chose to mean both of us. But, you couldn’t speak then, only I. You couldn’t give your word, therefore, the oath wasn’t binding to you. For the purpose of the deal, you meant only me. One small word has saved us from destruction.”

“How could she be held accountable to help me, then?”