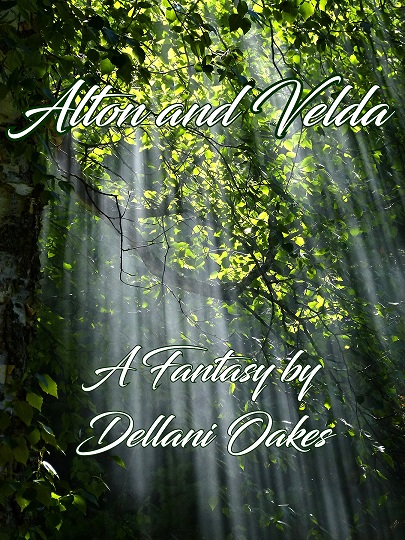 “What did she look like, this witch?” Velda demanded.

“Dark green hair, all snarled and knotted. Her skin was muddy, her eyes the color of scum on a pond….”

“Did she live in the heart of a swamp in a wretched hovel?”

“Well, no, not precisely. She went by Eleion. Oh, I see what you mean.”

“It’s not her name, it’s what she is,” Velda snapped. “One of the Eleionomae—a swamp naiad. I’m surprised she didn’t kill you. Not known for their kindly nature, that lot. What else did she say? About me?”

“Not much. Only described you. We’ve been trying to find you for weeks, after asking about you all along the road. You’re a distinctive pair.” She smiled. “That’s why I stayed back when Revanth came to the river. He scouted ahead and I would have run for safety had there been need.”

“There is no safety in the forest from a Wood Sprite,” Alton scoffed. “No tree would hide you from me.”

“What if I’d hidden in a cave?” Astrid’s chin came up defiantly.

“Tree roots grow in soil, their roots invade caves.” He shrugged, casting off her remarks with a casual toss of his silky, golden brown hair.

“And you’re being awfully naïve if you think we’ll drop everything, and help you out of this mess. What are we to do?” Alton demanded.

“Kill Eleion,” Velda said. Her voice and countenance betrayed nothing.

Alton felt a shiver run down his spine. Velda rarely turned to violence, but here she was advocating murder.

“Who is this Eleion to you, Velda? Someone who wronged you?” Astrid asked.

“Who she is to me, isn’t important. The fact she’s willing to take part in a battle between humans—is. And she agreed to help you? What, exactly, did you ask of her?”

Astrid shrugged. “We asked for her help to stop the war.”

Revanth snorted, shaking his mane. He stomped the ground angrily. Velda tipped her head toward him, indicating that Alton do something. The Wood Sprite stood, dusting the seat of his pants. He walked over to the horse-man, placing a hand on the beast’s forehead. The other, he placed on the powerful chest. Closing his eyes, he slowed his breathing, casting out with his energy. The horse snorted, but stood still.

“Now then,” Alton said softly. “I want you to form pictures in your mind of what happened. Think of it as a puppet show in your mind, with talking and moving. Can you do that?”

The two of them grew silent. Alton kept his eyes shut, reacting to the images he saw. The women watched his face play through a variety of emotions, ending in deep sorrow. Astrid took a seat near Velda on the log. Alton sighed, stepping back from the horse. He patted Revanth’s shoulder affectionately.

Alton held up a hand as the other went to his temple. “Give us a moment, love.” He took several deep, cleansing breaths, before speaking. “Never did that with a horse before. Yes, I know you’re really a man,” he replied as if Revanth had spoken. “But there’s horsey things in there too. Never mind all that.” He sank to the rock, holding his head.

“What he showed me,” he said quietly, “was a conversation with the witch Eleion. They didn’t ask her to stop the war, at least not specifically. The young lady asked for a means to bring an end to the war, let their families find peace, and then she asked for a way to always be together.”

“Is the war over?” Velda asked.

“It’s not entirely over, but at a standstill. His mother can hardly insist that he is still my fiancée, when he’s a horse. And my mother can’t force me to marry another, not when….”

“When what?” Velda asked sharply. “What haven’t you told us?”

“If we’re parted for more than a day, I will sicken, and probably die. We found this out shortly after he was enchanted. Revanth didn’t change right away. It was gradual. We went home, watched for events to play out. I took to my bed. When he heard, he came to me, and I revived. That night, we kissed. We were….” She blushed again.

“We were going to,” Astrid said. “But after a few minutes, he changed there in my bed chamber.”

“That must have been awful for you,” Velda said.

“Not good for Revanth either,” Alton added. “Though I suppose you can now brag you’re hung like a horse, eh?” He chuckled.

Revanth snorted. It sound for all the world as if he were laughing. They sobered when it became apparent the women didn’t share the levity.

“So, Eleion had her fun,” Velda said. “She stopped your war, and made it so you must always be together. One must always be specific with one such as she. Your request gave her too many variables to play with.”

One response to “Alton & Velda Part 4 by Dellani Oakes”