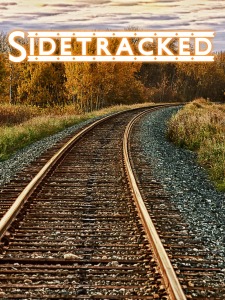 Aiden ducked and slammed his fist into the other boy’s belly. Eddy fell with a thump and a grunt. Gasping for breath, he let out a high, shrill sound like air escaping a balloon. Aiden left him there, ducking down the staircase. He banged through the door at the bottom, jogging down the corridor, toward the courtyard.

“Aiden Partridge!” a man’s voice yelled his name from his right.

Turning, he saw Principal Harkness. The man was red in the face, his lips pressed so tightly together, they were white around the edge.

“What are you doing, young man?”

“You’re not just late, boy, you’re coming to my office. Get moving!” he bellowed, pointing to the administration building.

Without a word, Aiden shuffled toward the office. He passed Burl, who was at his locker.

Aiden shrugged, shaking his head. The man and teen walked out the door. As it swung slowly shut behind them, Burl watched as the principal prodded his brother with his fingers. Harkness shoved him hard enough for Aiden to lose his balance. Catching himself, Aiden stepped further to his left, away from Harkness’ reach. The principal sped up so he could poke him again. Not liking what he saw, Burl went to a nearby classroom. Corin was just sitting down. Burl tipped his head at the youngest Partridge.

“Sure.” The teacher frowned, but nodded. “Need a hall pass?”

“Okay.” Still frowning and puzzled, she watched the boys hustle out the door, trailing their brother and Harkness. Concerned, Ms. Tyson followed them to the door. Catching the eye of Officer Mendez, she pointed. “Something’s not right.”

She went back to her class, forcing a smile. “Good morning, class.”

“Good morning, Ms. Tyson,” they said as she closed the door.

Aiden had expected to go into Mr. Harkness’ office. Instead, the principle took him to the restroom beside the auditorium. These were generally deserted during the day, and often kept locked. Today, the door opened easily, and Aiden was pushed in ahead of the principal. Instead of empty, it held three other people: Xander, Moe and Oliver. The three boys had murderous expressions on their faces as they squared off with Aiden. He turned to go back out, but Harkness blocked his escape.

“What’s this about?” Aiden asked, assessing the situation. He tallied his chances of surviving this encounter, and didn’t like the total.

“You know what this is about. You and your pals shut down a very lucrative enterprise. You embarrassed a lot of people, caused more trouble than you’re worth. Do you know what happens to interfering trouble makers?”

“No, but I figure I’m about to find out.” He knew he could take any one of the boys, maybe two, but three—not even he was that good. Xander looked a little spooked, but he’d join his hood friends if they jumped Aiden.

“You’re a pain in the ass, just like your old man. He never played the game, either.”

“I’d rather play my own,” Aiden said, shifting his weight to take on the boys when they rushed.

Moe rushed in first, going low with his shoulder, catching Aiden in the gut. He knocked him back a few feet, narrowly missing the tiled wall near the door. He took a swung at Aiden’s nuts, but felt his fist blocked and twisted hard. Bellowing, he tried to connect with his left. This was blocked, too. A leg sweep brought him to his knees, screaming.

Xander hung back, but Oliver jumped in, taking another swing at Aiden. He couldn’t block Oliver and contain Moe, though he did duck. Oliver’s fist still smacked the side of his head, making his ears ring. Another fist came at his face, and someone punched him in the stomach. By this time, he didn’t know if all three were on him, or just two. Lost in the pounding fists, he felt himself falter. Just as he thought he was going down, someone yanked Moe away.

A cracking blow landed, followed by a smack against tile and a loud, ululating groan. Closer to him, he saw Oliver tugged from behind. Blood spattered him as a fist, not his, connected with the boy’s nose. Xander tried to run away, but Aiden tripped him. He fell, hitting his head on the sink. Slithering to the floor, he bled from a cut to the chin.