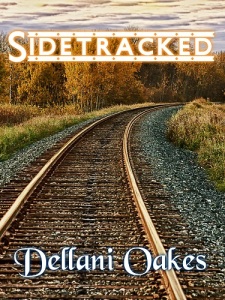 A few feet from it, she slipped on the wet pavement and fell. Crying out, she dropped her handbag, but clutched her umbrella in her left hand. Struggling to stand, she was aware of the fast approach of the men who were after her. Ballsy to accost her at the police station, where there were cameras, people. Rushing to her, one reached for his gun, but the other one stopped him, pointing at the building. Deirdre concentrated on their faces, memorizing details. Both were about her age, swarthy, dark haired. They looked cruel, brutal and not as afraid as they should be, right in front of the police department. They approached closer, making a grab for her. Deirdre’s hands worked furiously, seeking the button on the side of the umbrella handle, which made it open. It was being stubborn, stuck somehow. With a shake, she brandished the only weapon she had. The men, seeing the small, black and white checkered umbrella, laughed nastily.

Aiming it at the nearest one, the man without the gun in his jacket, she felt it click. The umbrella launched itself, hitting him in the groin. Since it was strapped shut, it couldn’t unfurl, and hit him in the nuts like a telescoping club. Deirdre slammed it home, making him howl. Using it like a staff, she smacked the other man with it. Whacking back and forth, she screamed as loudly as she could, praying she’d be heard inside. Her prayers were answered. Two armed police officers burst through the door, weapons drawn. They aimed at the men, covering a third, who helped Deirdre to her feet. Supporting her, he half carried her inside.

The two men were cuffed and led, dripping, to the booking area. Deirdre was given a seat in the lobby, her leg up on the bench beside her, topped with an ice pack. Someone found her a towel and a blanket. Someone else brought coffee. She couldn’t keep track of the movement around her, she was too stunned. Suddenly overcome with shivers, she nearly dropped her cup. A sturdy woman with dark blonde hair, took it from her. She wore the uniform of a civilian worker.

“They followed me in their car. Pulled a gun! I turned off Beville, taking a chance I’d find you. I don’t know my way around, I was dropping a friend at home.”

“Can we call someone for you?”

“My boys are at school, my husband is out of town.”

“Reilly,” she remembered. “Eoin Reilly. His number is on my phone.” She gave it over with trembling hands.

It seemed mere seconds later that Eoin rushed in the door. His makeup only half applied, his black hair in a sloppy bun, he was the best sight she’d ever seen. If his appearance caused comment, Deirdre didn’t hear it.

“What happened?” He held her close, rocking her back and forth.

Deirdre told him what she could remember.

A police officer sat nearby, taking notes. “You did the right thing, Mrs. Partridge,” she said.

“I’m lucky I was in the right neighborhood. I don’t know my way around. I live in New Smyrna. And I wasn’t going to lead them back to Eoin.”

“They’ll get by a night without me. Family first. I already called.”

“Who were they? Why? How did they know?”

“I don’t know, but I called Vanessa on the way over.”

“Is that Detective Weinstein?” the officer asked.

“Yes, ma’am,” Eoin said with a stunning smile. “Pardon my disarray, I was getting ready for work.”

“You headline at Pocket Pool,” she said with a grin.

“No, really? He’s a good friend of mine. Very talented.”

One thought on “Sidetracked by Dellani Oakes Part 47”