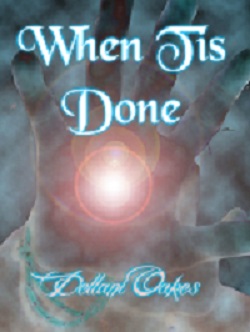 After dinner, the Mississippi & Louisiana teens meet at Jordan’s for awhile. They talk about the Texas contingent, and review plans for the following day.

He clutched his chest. “Ow, you slay me just by using that name.”

She repeated it several times and he yowled like a stepped on cat.

“How do you know it wasn’t the boys?” Jordan called.

“Because he’d be unconscious.”

Brian and Jordan kissed goodnight quickly, not wanting to hold up Sweet and Ginny.

“See you tomorrow. You be safe.”

“I love you kind of a lot, too.” He gave her another quick kiss and got in the car.

Jordan stood in the driveway with Andre and Louisa until they were out of sight. Louisa went downstairs, but Andre walked the house with Jordan, checking the doors and windows. He muttered wards as they made the rounds.

“I do, very much. But my unborn baby is here. I’m giving it every extra bit I can.”

“Will that be a problem? If Louisa is pregnant, she shouldn’t be in a fight.”

“I thought about that. If she’s close by, in a protected location, she can still help by chanelling her energy.”

“We’ve been practicing. Even if she’s a mile away, we can work effectively.”

“I didn’t even know that was possible!”

“No one told us it wasn’t.” He smirked. “According to my mom, provisions are made by the Powers That Be, for pregnant women. So they won’t put the baby at risk, their powers are boosted. They stay that way until the child is two years old.”

“Neither did we. But then again, none of us were pregnant before. No need to tell us everything.”

“True. Thanks for making the rounds with me.”

“Not a problem, Short Stack.” He kissed the top of her head and earned himself a jab in the ribs.

Jordan got ready for bed, wondering what the following day would hold. She and Brian would be learning the fire spell with the others. Though she could wield all four elements, as could Brian, they both had a penchant for fire. Her other strong suit was air and his best was, of course, earth. Grateful she got to sleep in a little, she turned out her lamp and fell almost immediately asleep.

The morning came with a grumble and rumble of thunder. Jordan woke, feeling fingers of energy up and down her spine. Worried, she examined the sky, probing the clouds. There was something not quite right about this storm. Though it seemed natural on the surface, below was a churning fury born of malicious magic. When she got to the kitchen for breakfast, everyone seemed on edge, especially Andre. She hadn’t forgotten that he not only read auras, he sensed emotions. Those of everyone around him, were nearly as tumultuous as the weather.

“I don’t like this,” Heath said, examining the sky for the third time since joining them.

“Dad, stop it. You’re freaking me out. We all know this isn’t right.”

“We need to do that ritual today, before nightfall. We can give our fire wielders an hour or two, tops. And we didn’t do the binding with you and Brian. Why?”

“I guess we forgot,” Jordan said. “We should do that before we do the branding.”

Jordan shrugged. “I just know we should.”

“I bow to your expertise,” Andre said, bowing slightly.

Jordan swatted at him, but he ducked away, chuckling.

“We need to get the fire wielders together immediately,” Heath said, whipping out his phone. He called Miles.

Since Heath was by far more attuned to weather than any of the Center Circle, Miles listened.

“Can we gather at your place?”

“Yes. Jackie already gave the go order. She’ll have the crystal room set up with everything we’ll need.”

“Excellent. Brian and Maribelle will be over soon. They’re on their way out the door.”

“Thanks. I need to make calls.”