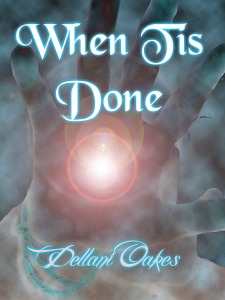 The Center Circle takes their meeting to Cynthia’s house. Neil is still a little off balance, with the people he doesn’t know. Adele Beauchamps says something about how unsettling it was to lose Cliff, and Neil loses his temper.

Standing abruptly, Neil dashed into the woods. Voices rose behind him, but only one person followed. He had a sense of who it was before they caught up. Heath put his hand on Neil’s shoulder.

“Obviously, we haven’t all considered the impact of this on you. We threw Cynthia into the breach and now, we’re demanding it of you. You have the right to refuse. But I’m hoping you won’t. I want my friend—my brother—to join us. Not only do I need you here, like the air I breathe, I know your strength will help us all. We’re hanging on by a thread, Neil. It’s slender and frayed. Adele doesn’t mean to offend. She’s trying to express the inexpressible.”

“I guess I owe her an apology.”

“Not at all. It was pretty damn callous of her to say and she knows it. My advice is to put it behind us and move on. If we hold onto every accidental slight, we’ll never get to the place we need to be. We need to be strong to help the kids. There’s a storm coming and we’re not ready. Will you help us?”

“Of course. You know that without asking.”

“But it’s polite to ask. We made a hell of an assumption. You have the right to say no.”

“But if I do, I lose the two most important things in my life—the Circle, and Cynthia. I won’t let her slip through my fingers again. I did that once, and it was the stupidest thing I ever did.”

“Thank you.” Heath gave him a hug. “Let’s figure this shit out. It’s the second most complex ritual I ever saw. The only one worse was what we did last year to summon Luminous Cayce.”

The women were inside having a look at Dora’s herbal supplies, as well as figuring out a meal. The men had started gathering kindling for the fire. They stopped, dusting their hands on their pants.

“I apologize for Adele,” Claude began.

“No need. We got some kinks to work out,” Neil said, forcing a smile. “I haven’t slept well for over a week and I’ve got a migraine from hell.”

Claude washed his hands at an outdoor tap, shaking them until they were dry. “Sit.”

Neil eyed him dubiously. “Why?”

“I’m a doctor who specializes in sleep disorders. I’m also a Healer. So sit.” He pointed to a nearby bench.

Neil sat on it, waiting. Claude shook his hands, praying softly. Miles brought a bucket of water over and poured salt in it. Thanking him with a nod, Claude waved his hands around Neil, looking as if he were pulling things from him, casting whatever it was into the bucket. This continued for several minutes and Neil felt the pain lessen, then recede altogether. Claude finished, smiling. The others had wandered off, leaving them alone.

“Pranic healing. It is very effective in realigning the aura. Yours was seriously out of whack—not surprising given what you’ve been through. I would suggest doing this several more times in the next few days. I hear that Marissa is getting very good at it, as is Cynthia.”

“Cynthia provides a different kind of healing,” Neil said quietly, not wanting to share with the entire group.

“We can tell, my friend. It was all over you both. Good. She’s felt at loose ends since taking Cliff’s place. I’m surprised the Circle didn’t call you sooner.”

“I just mustered out, Claude. I couldn’t get back for Cliff’s funeral, or I would have been here already. I signed my final papers a week ago, and the headaches started.”

“How long did you resist the pull to come?”

“I didn’t. I settled my affairs in upstate Washington and hit the road.”

“If it’s any consolation, had you waited, you’d feel a hell of a lot worse. Symptoms?”

“All of the above. Hey….” Neil leaned closer. “Did you—glow—your first time with Adele?”

“Cause we both lit up like luminaria last night.”

“No kidding? I never heard of such a thing, but we don’t usually discuss our private moments. Our wives would kill us.”

“I understand. Normally, I wouldn’t, but it was—everywhere.” He glanced down at his zipper.

“No shit!” Claude lost his professional aplomb for a moment. “I’d say that was a symptom, but I’m not sure what of. And don’t worry. Patient confidentiality.”

When Tis Done
← Red River Radio Presents What’s Write for Me with M. Pepper Langlinais
→ Excerpt from Minnie and Moe by Dellani