He Thought He Saw – Conclusion 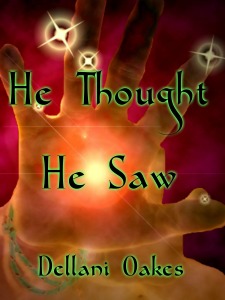 After talking to the police, they go to Chase’s house to wait for news about Brain. Soon, Heath calls to give them an update.

“Doctor decided a tree root got him when he fell. It’s great what a little compulsion can do. Never saw anyone as good at it as Claude, except maybe Clifford. Everything okay there?”

Jordan told him how it had gone with the police. Her father chuckled. “See what I mean? Stick tight, I’ll be there soon. They’re keeping Brian overnight. Might keep Maribelle too. She’s a wreck. Miles is going to stay up here. I’m going to run him up some clean things, but first, I want to get my girls home.”

The news of Brian’s condition was greeted enthusiastically. Everyone cheered and laughed except Jordan. Her mother noticed how subdued she was.

“I thought you’d be happier than anyone.”

“I am, Mom. I almost lost him. He’s my best friend and he almost died!” She burst into tears.

“But he didn’t. You saved him with your quick thinking. We couldn’t have done this tonight without you and the others. You saved our lives.”

“I don’t know. Somehow, I doubt it. I think it will need a more concerted and organized attack to kill him—if he can be killed. But for now, he’s gone.”

Heath arrived and everyone went their separate ways. To save them from having to drive all the way home at that late hour, the folks from Louisiana spent the night. Andre and his parents were with Chase. Louisa’s family went with Marissa’s and the Sweets came to Jordan’s. Brian’s house was a crime scene, so Heath gathered spare clothing for Miles and Maribelle. There were a few of Brian’s things in the clean laundry. Jordan packed those for her father to take.

“Sure, honey. I’m sure Brian will want to see you when he wakes.”

Brian looked pale and the skin was tightly drawn over the bones in his face. He had a warming blanket over him since his body temperature wanted to drop. He looked terrible. Jordan gave a little cry when she saw him.

Maribelle was in the bed next to her son. Miles sat on the one chair in the room. There were pillows and blankets in the oversized window seat. He accepted the clean clothing gladly, and went into the bathroom to shower and change.

Jordan walked over to Brian’s bedside. She sat on the edge of the bed. Heath pulled the curtain between the two beds to allow her some privacy. He talked quietly to Maribelle while Miles was in the shower.

Jordan took Brian’s hand, lacing her fingers with his. “Hey, you goon. Get better, okay? I still owe you a smack with the pillow.” She put his hand to her cheek as she leaned over and gave him a kiss on the lips. His skin felt unnaturally cool, frightening her. Jordan blinked back tears.

“We drove him off,” she said with quiet triumph. “Mom says he may come back, but he’s gone for now. Because of you. You were so brave—stupid, but brave. Why did you grab him? Don’t you dare scare me like that again! You’re part of me now. If anything happened to you….”

She rubbed her cheek on his hand again, kissing the fingers. With her other hand, she brushed his hair from his forehead. He was bruised up, but his color looked a little better. Jordan kissed him again, her lips lingering on his. Brian’s other hand rose, brushing her hair, as he deepened the kiss.

“Best way to wake up, ever,” he murmured. His eyes opened and he smiled. “I’m glad you’re okay.”

Miles heard the announcement as he came out of the bathroom. Laughing with relief, he carefully embraced his son.

“She got pretty banged up before you got there. Your mom fights like a tiger. She kicked some serious ass.”

“She sure did,” Heath admitted. “Jackie too.”

“But Maribelle’s condition….” Miles stopped himself.

“You mean her eyes?” Brian asked.

Miles blushed, gazing lovingly at his wife. “Uh, why, no. Your mom is—that is, Mom and I….”

“I thought you’d been gone for months on end. When did this happen?” Brian demanded.

“Well, to be honest, I’ve visited a few times. You just didn’t know.”

“Misdirection. Even Maribelle didn’t know where I was the whole time, or where I’d been. But I had to see her. You’ll understand when you get older. You have to renew that bond.”

“It was the bond that saved you,” Maribelle said. “If anyone but Jordan had tried to raise you, it wouldn’t have worked.”

“But why?” Brian and Jordan asked together.

“She’s your other half,” Maribelle replied. “She’s been a part of you since conception.”

“I’m not really comfortable with this whole destined to be together thing,” Brian said.

“Get used to it, my boy. It can’t be avoided,” his father replied. “Believe me, I tried to play the field and date other women. Couldn’t do it.”

Miles took Maribelle’s hand. “Because no one else measured up. Once you’ve found your perfect match, there’s no competition.”

They kissed quickly, saying good night. Jordan hugged Brian’s parents and she and her father left. As they were driving home, Jordan reflected on all that had happened in the last few days.

Her father shrugged. “I don’t know, honey. I don’t think he’s dead, if that’s what you mean. But for now, he’s gone.”

“We’ll have to be stronger next time. He almost killed us.”

“We weren’t prepared. But we’ll study and train.”

3 responses to “He Thought He Saw – Conclusion”