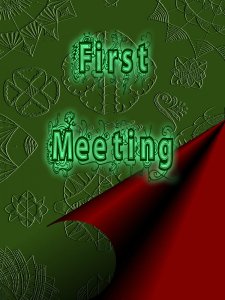 I am a big fan of first meetings, or the Meet Cute as they are called in romantic comedies. These often set the tone for the relationship, and tell us a lot about how the couple will interact with one another later in the story. Although they get off to a somewhat rough start, Malin Dimas and Carina Enriques-Deza find that they are mutually interested. Carina is an art student who loves photography. She’s so absorbed in her projects, she doesn’t always pay attention where she’s going, particularly if she’s in a rush.

Class ended, but Carina hardly noticed. She had another class, then she had to work. Her less than glamorous job was waiting tables at a small outdoor restaurant on Hypolita Street.

Rushing to her class, she neatly avoided running into anyone until she got to the staircase. Going from the bright sun to the sudden shade, she was still wearing her sunglasses. She ran headlong into a tall, broad shouldered body. Her bag went one way, her body the other, while the strong male hardly moved. He did grunt, her elbow having caught him inadvertently in the midsection.

Carina sprawled on the ground, cursing in Spanish and English as the man tried to help her up. Hardly looking at him, she was trying to find the things that had fallen out of her bag.

Her phone had landed in a shallow puddle. Her pens and lip gloss were nowhere to be found. A well calloused, long fingered hand helped her up, brushing her off as a pleasant tenor voice apologized for running her down.

“I’m so sorry. I got sun dazzled I guess,” he said quietly, handing her the lip gloss and pens. “I got in this dark and I couldn’t see a damn thing. Sorry about that.” His soft Southern accent was warm and welcoming.

Carina looked up at him. He had black hair and dark brown eyes. Her own jade green eyes locked with his for a moment and she smiled.

“Well, it is the Sunshine State, right?”

“No problem. Sorry I elbowed your gut.”

“Missed the nuts,” he said with a grin.

Carina giggled as she trotted up the stairs. The young man walked with her, taking the steps two at a time.

“I bet your girlfriend will be grateful for that,” she said as he opened the stairwell door for her.

“Don’t have one, but I’m mighty happy you missed ’em. I’ve grown a bit attached to them over the years.”

With a sidelong glance, she eased past him as he held the door for her. He stood by it, leaning on the edge, gazing down at her. There was barely enough room to slip through, but she did because she was in a hurry. Waving to him, she dodged in her classroom as the instructor was about to close the door.

“Carina, nice you could join us.”

“Sorry. I fell,” she explained as she walked past him.

“You okay?” Those were the last words that made their way into the hallway.

Malin Dimas shouldered his backpack and walked downstairs. He would have used any excuse to walk that girl to her class. He didn’t have another class until eleven, so he headed to the nearest coffee shop, got a large double shot and wandered to the Plaza in front of Government House. Sitting on the steps of the Slave Market, he gazed out over the town.

One response to “First Meeting from Indian Summer Revisited”